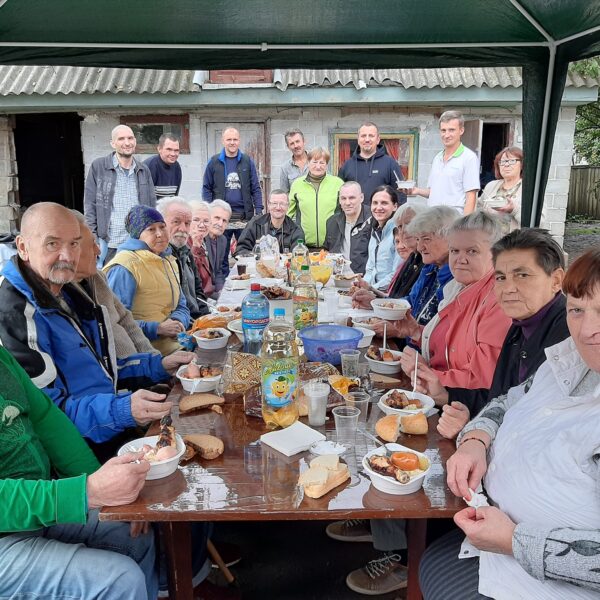 The St. Martin`s congregation is a diaconal community of the German Evangelical Lutheran Church of Ukraine. It was started as an informal church group (mission) in Kiev in 2017. By 2019, it
had already received state registration.

Ukraine is the seventh largest country in Europe with a population of over 40 million. This is a country with an incredibly diverse and beautiful nature. Ukraine has a rich culture and a complicated history that calls for rethinking. Here you can see the peaceful coexistence of many different nationalities and beliefs. But at the same time, Ukraine is a country of
contrasts, where luxury coexists with extreme poverty. Our country has the richest black soil, many natural resources, and great potential. However, it is also the poorest country in Europe. The occupation of part of the country’s territory, military conflict, corruption, and oligarchy aggravate the economic crisis, which negatively affects the lives of millions of Ukrainians.

Kiev is the capital of Ukraine and a huge megapolis. The city agglomeration is home to about four million people. Kiev is a city of opportunities. It is visited by workers from all over Ukraine in search of well-paid jobs. But not everyone succeeds. Thus, here you can also observe how luxury exists side by side with poverty. In Kiev, there are many Christian churches of various denominations — from traditional churches with liturgy to modern youth churches. Such religious diversity is possible thanks to the rather liberal legislation of Ukraine in the religious sphere. Churches differ among themselves not only in rituals but also in the degree of involvement of churchgoers in church and diaconal activities. The diverse life in the capital offers many opportunities for Christian ministry. Caritas, a Greek Catholic organisation and Protestant churches are actively engaged in the diaconal sphere in Ukraine. There are often two service models. The first is institutionalised, where diaconia is carried out by organisations specially created for these purposes with minimal involvement of the congregation. The second is evangelistic-diaconal, where the congregation members are actively involved in diaconia, but the primary task is evangelisation, and diaconia is in the second place. Particular attention in the church diaconal ministry in Ukraine is paid to internally displaced persons (due to the war in Donbas), orphans and families in difficult life circumstances, and people suffering from alcohol and drug addiction. It should be noted that in the Protestant environment, voluntary service is very actively used in diaconal projects.

Since 2015, our Church has been experiencing a serious internal crisis. It is associated with a complex internal church conflict, as well as with the departure of many churchgoers abroad in search of a better life. Staying in Church during the crisis allowed us to rethink our ministry in the city of Kiev. Acquaintance with interdiac and its concept of conviviality — the art and practice of living together, played a very important role in the decision to build a diaconal community. As a result of the exchange of ideas, joint seminars, and projects, we were able to form a team of like-minded people who were interested in working on the creation of a diaconal community.

First, we applied the experience which we already had in our Church. We collected clothes for the needy, bought food for the hungry, participated in trips to the East of Ukraine, to the front-line zone, and much more. We acquired our present identity as a community after getting to know the House of Mercy. The House of Mercy is a public organisation founded by a married couple Aleksey and Elena Kuchapin. The idea of creating such an organisation came to Aleksey in connection with his personal life experience and as a result of seeing a large number of homeless people in Kiev who needed help. As Christians and inspired by their faith in Jesus Christ, they created an organisation whose purpose was to help the homeless return to life in society, as well as provide spiritual support.

In search of partners, they turned to the German Bread for the World Foundation, which recommended them to form ties with one of the Lutheran communities in Kiev to receive a grant. The meeting of our community and the public organisation was the answer to our prayers. It helped us find our ministry and together serve people who have lost their homes. About 10 thousand homeless people live in Kiev, some of whom are elderly people with disabilities. Homelessness is a stigmatising label in our society which indicates that these are people who went downhill, not deserving of humane treatment. Indeed, many homeless people are content with this lifestyle, but some understand that living on the street is abnormal and want to get out of this situation and change their lives. Not everyone ended up on the street of their own free will, and not everyone wants to stay there. Someone may, due to an abrasive personality, lose social connections, someone else may become a victim of scammers, and someone else may have simply been thrown out into the street by relatives. Elderly homeless people and people with disabilities have a harder time than others.

Unfortunately, in our country, there is no effective operating mechanism that would help such people. Therefore, there is a great need for helping the homeless. Most church and public organisations have focused their assistance efforts on providing the homeless with foodstuff, hot meals, or clothing. The House of Mercy has set a slightly different kind of goal — to take a person off the street. For this purpose, they started renting apartments in Kiev, which began to house the homeless people for a certain time (usually up to 3 months). First of all, they are focusing their attention on the elderly and people with disabilities — the most vulnerable group. During their stay in rented housing, the formerly homeless people are provided with the necessary medical assistance, staff and volunteers help them to restore documents. Thanks to donations, residents are provided with the necessary foodstuff. Besides, an important mission of the organisation is to help these people return to society.

It was this task that became the starting point from which our cooperation began, which eventually bore its special fruit — a part of the parishioners became employees and volunteers in the House of Mercy, some of the staff of the House of Mercy became part of our congregation, and some of the people under guardianship joined us. In this way, over time, we built a true diaconal community. In 2018, with the support of interdiac and SCEAV (Silesian Evangelical Church of the Augsburg Confession), the congregation of St. Martin began to organise charitable lunches on Sundays. We brought the elderly homeless and disabled people from the shelter of the House of Mercy to the worship service, after which we all organised a shared lunch.

So, we worked step by step to create an atmosphere of acceptance and a new community where there are no «useless» people. It was an extraordinary experience for the old people; they later said that no one had treated them like that before. Trying to help in the process of re-socialisation and restoration of relations with loved ones, the pastor of the community, Igor Shemigon and a volunteer, Sergey Berezin offered their help in conducting Bible studies and providing counselling assistance. All this was voluntary. For many homeless people, these mutual conversations provided an opportunity to look at their lives differently, reflect on the topic of forgiveness, and to try to fix their relationships with their relatives. After a temporary stay in rented housing, the House of Mercy is searching for another place for these people. Sometimes it is a state nursing home, sometimes a church one, but there were cases when it was possible to find relatives who were ready to take a person in. Therefore, spiritual work that would help restore relationships, forgive, or, on the contrary, to ask for forgiveness is very important.

Helping the homeless requires a lot of financial and human resources, therefore the House of Mercy has always been open to cooperation with volunteers and other organisations. The congregation of St. Martin was also able to participate and suggested the idea of meetings for volunteers so that not only could they do something useful but also become a part of the community of equals. Meetings of integration took place in a flat rented by the congregation. During these meetings, one could watch a movie together and take part in a discussion. Sometimes evenings of board games were held. But the most important thing has always been communication and personal interaction.

Serving the poor is one of the largest fields of work of European Diaconia, but, locally, in ordinary congregations, one can see that churchgoers distance themselves from serving certain “inconvenient” groups, including homeless people. Sometimes it is difficult to get them involved in the life of the congregation because they cause a rejection on the part of the so-called “decent churchgoers”. Therefore, quite often one can speak rather of a separate area of diaconia for the poor, even separate church groups for the poor, and not of their full-fledged
acceptance into the Church. Success in conviviality is usually only achieved in certain special cases. 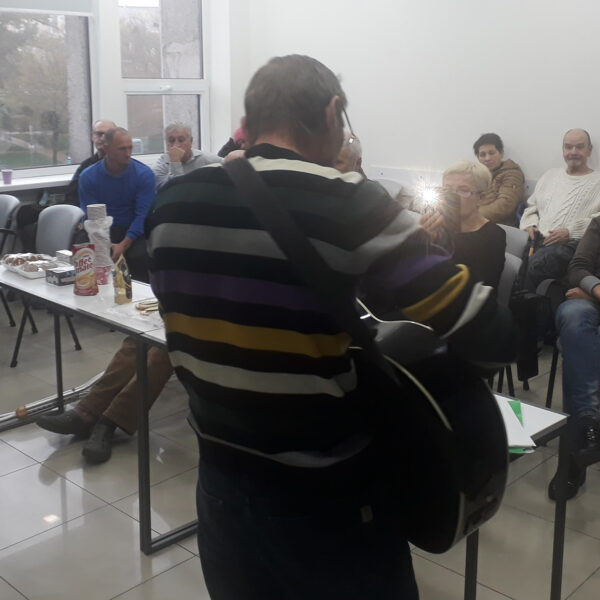 In our young congregation, misunderstandings also occur due to these characteristics of ministry. It takes a lot of humility and motivation to serve and keep in touch with homeless people. Therefore, we understand it, if someone chooses a more familiar religiosity, switching to another congregation. But if God prompts someone to join His special work, this
gives us genuine joy.

In the Ukrainian context, sacred space still means a lot for religious groups. The word church for most means a building, not a community of believers. Our congregation does not have its own building. The construction or purchase of a building in the capital requires significant funds. Therefore, we rent a room for worship, and also gather in small groups in different apartments. Our ministry on the premises of the House of Mercy also takes the form of small groups, during which we study the Scriptures or Lutheran doctrine. This format enables all participants to be active, not only listening but also asking questions or sharing their thoughts. This is very important for people who used to live on the street and who felt “invisible”. Being listened to provides an opportunity to regain your human dignity.

For the holidays we rent a bigger room, where we invite everyone from the shelters and our congregation members. This is a special moment when we can all together experience a more ceremonial service, and after that, we can socialise and cook together. This is a real conviviality — the art of living together. We have two dreams. The first one is to share our
experience with other communities of our Church so that other communities could find themselves in the diaconal ministry and try the idea of conviviality in practice. We know that several of our small communities in Ukraine have something similar, which means that we have likeminded people with whom we can develop the idea of the Diaconal Church together.

We share our second dream with the House of Mercy. It is connected with the purchase of a house near Kiev. In which the former homeless people could find a home and live together in Christian fellowship. We hope that the Lord will bless our further ministry and our dreams.